Since completing his training, Dr. Binette has successfully held several positions, including service at the Phoenix Indian Medical Center as a General Internist, a Medical Examiner, and the Medical Director of a Skin Care Company. Dr Mark Binette has been in practice for 24 years.

Throughout his career, Dr. Binette has received numerous awards for his service, authored and co-authored several published papers, and given many talks on various medical topics.

Personally, Dr. Binette is married with four children. He loves the outdoors and regularly plays softball, racquetball, basketball, jogs, and goes downhill skiing. He also continues to the find time to play the guitar and is active in his local church. 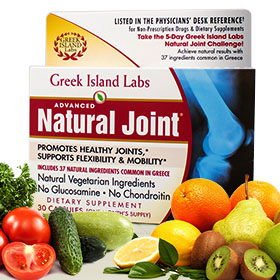 **Results may vary. These statements have not been evaluated by the Food and Drug Administration. This product is not intended to diagnose, treat, cure, or prevent any disease. *Dr. Binette believes in the product so much, he is now an official spokesperson for Greek Island Lab's Natural Joint